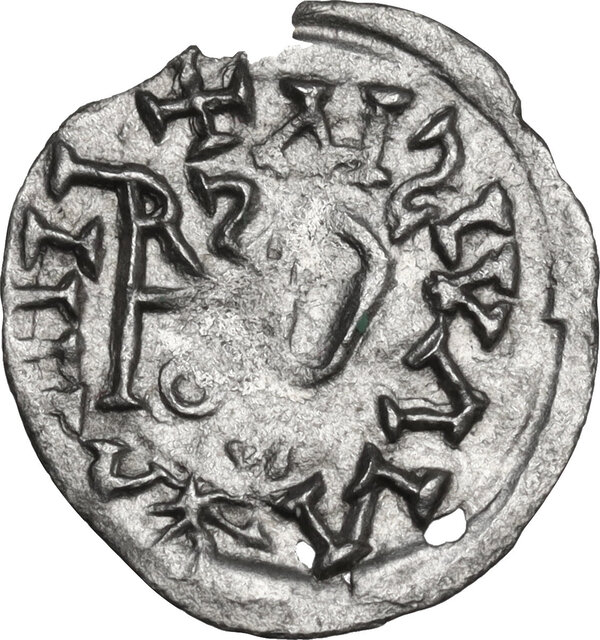 Lotto 464:
The Gepids. Uncertain king. AR Quarter Siliqua, in the name of Byzantine Emperor Justin I (517-527). Sirmium mint. Obv. C(retrograde) IVS TIIPPIIΛ. Diademed and cuirassed bust right. Rev. Garbled legend. "Theodericus" monogram; cross above, star below. Cf. Demo 123. AR. 0.64 g. 17.00 mm. RRR. Extremely rare and in very good condition for issue. Brilliant and lightly toned. Three almost invisible holes beside edge, otherwise good VF. While coins of this type were first attributed by Brunsmid to the Gepids, Stefan later proposed an Ostrogothic mint at Sirmium has become the most accepted. The incompatibility of the weights of these issues with the Ostrogothic weight standard established under Theoderic, as well as the stylistic and epigraphic similarity with other Gepid issues struck in the names of both Anastasius and Justinian I, led Metlich to conclude that the whole so-called “Sirmium” group is, in fact, Gepid.
The Gepids were a sub-tribe of the Goths who began arriving in Dacia in the AD 260s, and spread throughout the Balkans before invading Italy in the wake of collapsing Roman power in the late 5th century AD. For the most part, the Gepids were merely vassals of the greater Ostrogothic or Hunnic tribes, but from AD 454, when they defeated the Huns at Nadeo, to AD 552, when they were displaced by the Lombards, the Gepids possessed a state of their own in the region of the Carpathians and around Sirmium. Very rare silver siliquae and quarter siliquae are attributed to the Gepids during this period.
Base d'asta € 400
Prezzo attuale € -
Offerte: -
Lotto non in vendita