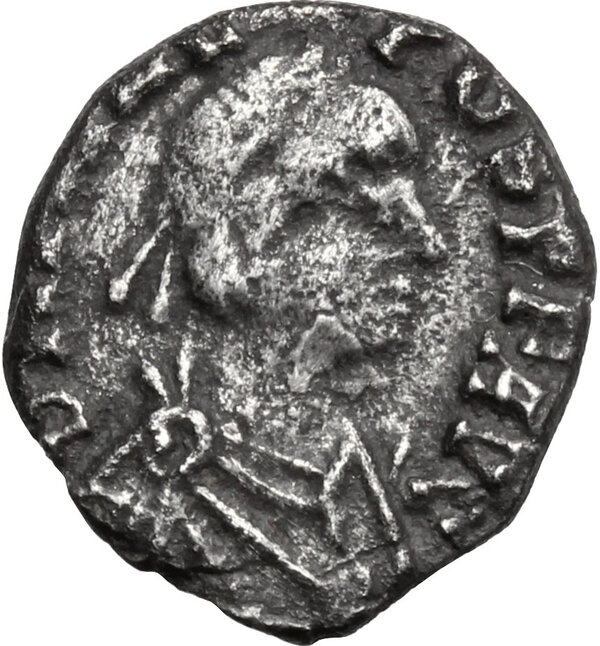 Lotto 367:
Julius Nepos (474-475). AR Half Siliqua, Ravenna mint. DN [IVL NE] POS PF AVG. Diademed, draped and cuirassed bust right, seen from the front. / Turreted Ravenna standing left, right foot on prow, holding sceptre and cornucopiae; across field, R-V. RIC 3216 (R4); C. 15 (fr.150); Ranieri 193-5. AR. 0.58 g. 11.00 mm. RRR. Extremely rare and very seldom offered. Well centred and nicely toned. VF. The last 'legitimate' Roman emperor of the West, Julius Nepos was the nephew of the patrician Marcellinus, virtual ruler of Dalmatia in the fragmented West Roman Empire of the later fifth century AD. He also had close ties with the East Roman Emperor Leo (AD 457-474). When the Western Roman throne became vacant in AD 473, the Master of Soldiers Gundobad raised a minor nobleman named Glycerius to the purple. Leo decided the affront could not be tolerated and appointed Nepos in his stead. Glycerius relinquished the throne and was packed off to Dalmatia to serve as bishop of Salonae, while Nepos took charge of the state and tried to arrest the Western Empire's terminal decline. The Roman people initially supported Nepos (the poet Sidonius even praises him as a 'true emperor in character no less than prowess'), but lost enthusiasm when his ambitious plans came to nothing. In the summer of AD 474, his master of soldiers Orestes rebelled and led an army to Ravenna. His support having evaporated, Nepos took ship for his homeland of Dalmatia on August 28, AD 475. Orestes had his young son Romulus Augustus acclaimed emperor, but he 'reigned' as a compliant figurehead for only 10 months before being deposed by the warlord Odovacer in mid AD 476. Meanwhile, Nepos continued to claim the title Emperor of the West from exile and petitioned the new eastern Emperor Zeno for assistance. But Zeno had no soldiers to spare and tacitly accepted the status quo. Nepos was still plotting his return to power when he was murdered in AD 480 by agents of Glycerius, the man he had deposed six years earlier. (Heritage 3026, 2013, 23456 note).
Base d'asta € 5000
Prezzo realizzato € 5500