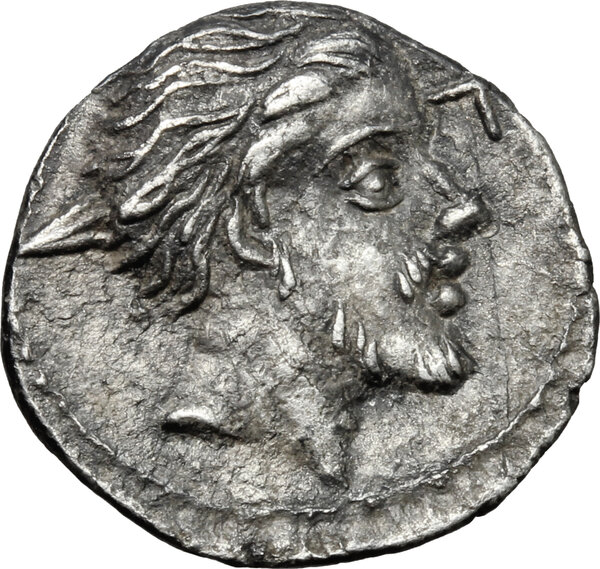 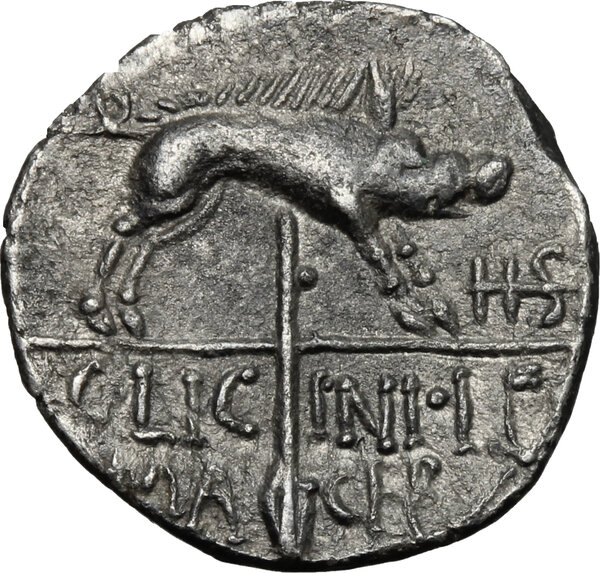 C. Licinius L.f. Macer. AR Sestertius, 84 BC. D/ Male head right, bearded, with disheveled hair, pierced by an arrow (or "pilum"). R/ Boar standard; to right, IIS with a horizontal bar through the centre; below, C. LIC-INI• L F/ MA-CER. Cr. 354/-; B.-; Syd-. AR. g. 0.88 mm. 11.00 11h. Unlisted in the standard references, unique and unpublished. Superb and prettily toned. About EF. This unique and highly interesting coin is quite puzzling and raises various questions.
C.LICINI L.F.MACER
C. Licinius Macer, moneyer in 84 BC, is to be identified with the historian and annalist frequently mentioned by Livius, people's tribune in 73 BC and praetor in 68. Impeached for extorsion by Cicero in 66, he took his own life to avoid the disgrace of a public condamnation.
Before this previously unknown example, were attributed to Licinius Macer just the denarius RRC 354/1 (bust of Apollo/Minerva in quadriga) and the AE asses RRC 354/2-3.
METUS GALLICUS
The types (pierced head bearded,with disheveled hair/Boar standard) are at all Gallic. The obverse, while being quite amazing for rawness and bloodiness, has an undeniable precedent in the issue of Sergius Silus (RRC 286/1, 116-115 BC) which shows, on the reverse, a soldier on horseback holding a severed head of barbarian (cf. lot 185 ).
Since the sack of Rome by the Senones of Brenno in 387, the national Roman self-consciousness had been built upon the metus Gallicus. During the 2nd century BC the Arverni and the Allobroges, powerful and warlike Gaulish tribes, continually broke their treaties and attacked Roman territory.
In 121 BC they were once more engaged and finally defeated by the proconsul Domitius Ahenobarbus and the consul Q. Fabius Maximus. The king of Arverni Bituitus was captured and sent to Rome for Q. Fabius' triumph.
The series of denarii RRC 282 issued in 118 BC at Narbo by L. Licinius Crassus (the great orator, belonging to the same family of Licinius Macer) and by his mintmasters colleagues, shows Bituitus on his war chariot (said of silver) brandishing spear and holding shield and carnyx.
The last king of Arverni Vercingetorix will be portrayed by the Caesarian Hostilius Saserna in BC 48 (RRC 448/2).
THE MARK OF VALUE
Since their introduction in 211 BC circa, a denarius had been reckoned at ten asses (hence the X on most) and a quinarius at five asses (mark of value V); while the sestertius, introduced as ¼ of denarius, had a nominal value of two and half asses, hence its mark IIS.
Circa 140 BC, for the gradual reduction in the size of bronze denominations, the denarius was retariffed to sixteen asses.
The new mark of value XVI, first appeared in BC 141 on the denarius of L.Julius (RRC 224/1) (cf. lot 160), was soon replaced by another mark of value, first appeared on the denarius of L. Antestius Gragulus in BC 136 (RRC 238/1) (cf. lot 174). This new mark, an X now with a horizontal bar through the centre, is sometimes read as a monogram of XVI. As a consequence, the quinarius was obviously worth eight asses and the sestertius, very sporadically produced, four asses.
However, after the retariffing of denarius, the rare sestertii hitherto known (D. Silanus of BC 91, L. Piso Frugi of 90 and the issues from 48 to 44 BC) all are devoid of mark of value.
This sestertius, instead, shows an inequivocal retariffed mark of value, exactly like as a retariffed denarius: the early mark of value now with a horizontal bar through the centre.
THE COMPASS DOT
Below the boar, on the reverse, is clearly visible the compass dot : the centering point made by the compass in the die, for describing the linear border or the circle used to align the border dots (cf. also lot 281).
MICRO XRF
We have subjected this coin to micro X ray fluorescence spectrometry (micro XRF). The analysis reveals a metal perfectly fitting with ancient metallurgy (see e.g. W. Hollstein: Metallanalytische Untersuchungenan Münzen de Römischen Republik, Berlin, 2000), with spots of strong mineralization. You can see the results at the following link: https://www.artemideaste.com/blog/view/12