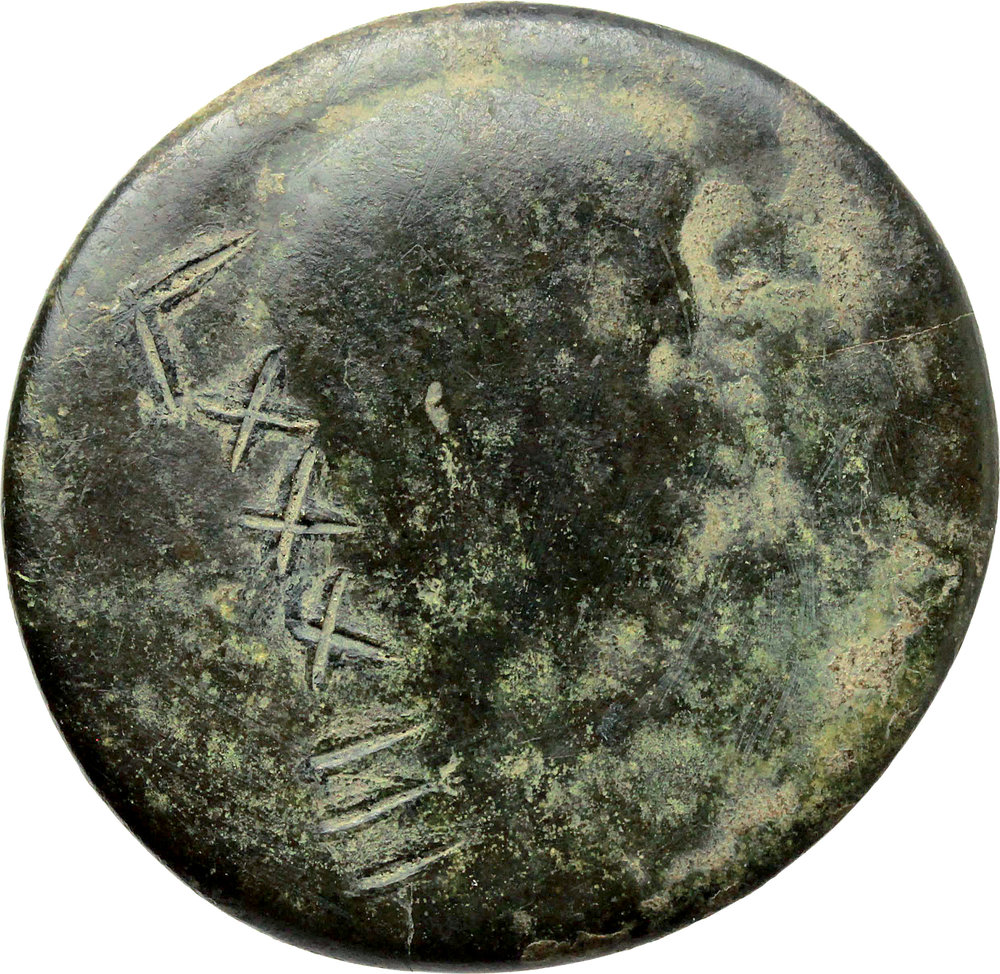 Lotto 302:
Ostrogothic Italy. Non-Regal Bronze Issue from the Period of Theoderic and Athalaric. AE Double-follis of 83 Nummi. AE Sestertius of Augustus, counter marked on the obverse with LXXXIII, 1st quarter or 1st half of the 6th century AD. Obv. Bare head of Augustus right; in the left field, 'countermark' LXXXIII placed outwards and reading downwards. Rev. Almost invisible traces of laurel-wreath. MEC pl. 4,65 (for the denomination). MIB 13 (Vandals, for the denomination). Morrisson (1983) 1-2 (for the denomination). Cf. Wroth, Vandals Ostrogoths and Lombards, p. xviii. For undertype, cf. Augustus (possibly) RIC 501, RPC 2233. AE. g. 18.06 mm. 33.00 RRR. These contermarked issues have long been considered as made in Vandalic North Africa, but the hoard evidence and the results of the latest studies makes it seem that they were, in fact, made in the Ostrogothic Italy, and were in use there during the first quarter or first half of the 6th century (Cf, NAC, May 1993, 457). The marks of value LXXXIII (of the greatest rarity, only very few specimens known) and XLII refer to a sixth and a twelfth of a silver unit valued at 500 nummi, which itself amount to the 24th fraction of a gold solidus valued at 12,000 nummi. (Cf. Grierson, MEC, p.28-31). These are not countermarked coins in the usual sense of word, since the LXXXIII and LXII figures were not punched or stamped with a single instrument, but seem to have been cut or incised with several chisel strokes. (C. Morrisson,1983). J. Friedlander suggested that for the more finely incised series the pieces were certainly softened by fire in order to be able to engrave more easily the deep and crude strokes. (“Die Erwerbungen des Konigl. Munzkabinets vom 1.Jan.1877 bis 31 Marz 1878” ZfN VI, 1879, p.1-26). Such crude workmanship seem to point to the markings being done by private persons, at least in the case of the most anomalous countermarks. While for the more finely incised countermarks – like our outstanding example – the role of some official authority cannot be excluded. (C. Morrisson). Tentatively, Morrisson suggests that an official practice of marking and re-issuing older bronzes was followed with varying success by private individuals as and when they came into possession of similar pieces. The only paper devoted solely to these countermarked coins is : Morrisson, C. “The re-use of obsolete coins : the case of Roman imperial bronzes revived in the late fifth century” in: ed. C.N.L. Brooke et al. Studies in Numismatic Method presented to Philip Grierson (Cambridge 1983). About these coins, see also : Gert Boersema, “Early Roman Imperial coins countermarked in late antiquity” and M.Ladich, “La monetazione vandalica” in Cronaca Numismatica 17, 2001, p.8-9. Of the greatest rarity and extremely interesting. Earthy dark green patina. Undertype fair. Countermark EF.
Base d'asta € 900
Prezzo attuale € -
Offerte: -
Lotto non in vendita